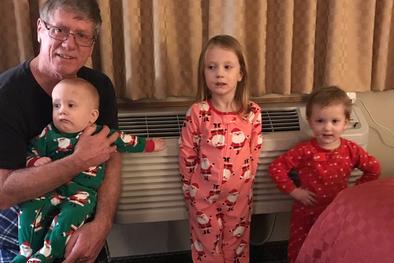 I am so sorry to let you know that Roger is deceased. Please read his obituary below.

Roger Scott McNeil, 66, of Fargo, ND, died August 5, 2021 at their lake cabin in South Dakota. Roger was a husband, dad, papa to five kiddos, brother, brother-in-law, uncle, cousin and friend. He was also an avid square dance caller and dancer.

He was born November 8, 1954 in Ellendale, ND to Raymond and Helen (Ferris) McNeil. Roger graduated from Ellendale High School in 1972. On September 15, 1973, he married his high school sweetheart, Bernadette Mastel, also of Ellendale, at St. Helena's Catholic Church in Ellendale. They moved to Fargo with their two children, David and Michelle, in February, 1988.

Roger worked in the trucking industry in various positions his entire work career. He loved spending time at their lake cabin on Elm Lake near Frederick SD, where he was always working on a project improving the property.  He LOVED spending time with his grandkids. Roger became a square dance caller in 2000. He and Bernadette square danced in all 50 states in their 21 years of dancing. Roger loved to call - and it didn't matter if it was one square of 100 squares; but his biggest thrill was calling with the live band at the national conventions.

Roger took his life after suffering from depression for years.  Please, if you are suffering in any way, please get help/talk to someone.

Roger is survived by his wife, Bernadette, of 48 years, their son David Scott, his wife Lesley (Richard) and their children: Olivia Katherine (7), Addison Rae (5), and Matthew David (3) of Fargo, ND and their daughter Michelle Rae, her husband Rodger Ladd and their two children: Madeline Rae (12) and Jacob Baylor (7) of Bluffton, SC. He is survived by his brother Bruce (Janie) McNeil of Congress, AZ and his sister Elaine Redmond of South Hutchinson, KS.  He is also survived by many nieces, nephews, cousins and in-laws. He was preceded in death by his oldest sister, Bonnie Lee Stoebner, his parents, brother-in-law, Kirk Redmond and his father-in-law, Aloys Mastel.

In lieu of flowers, please make a a donation to a suicide prevention non-profit, St. Jude's Children's Hospital or the charity of your choice.