In addition to calling and cueing, Roger and Bernadette are very active in square and round dance leadership.  They have been officers (and currently are officers) at club, region and state levels.  They've taught mainstream, plus and round dancing. 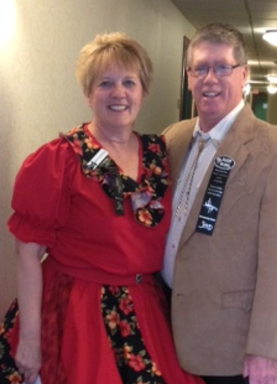 Roger and Bernadette took square dance lessons in Aberdeen, SD, in 1973.  They quit dancing in 1977 when their son David was born.  David was soon joined by his sister Michelle, and Roger and Bernadette spent the next few years raising their children. In 1988, they moved to Fargo, ND, to pursue job opportunities.  In 2000, they realized that they could do whatever they wanted because they were empty nesters!! They had talked, off and on throughout the years, about checking out the square dancing in Fargo, which is exactly what they did in March of 2000.

The rest as they say is history!!

Roger has been calling for clubs since 2001 though he will never forget his first paid gig for the New Year's Eve dance hosted by the Lakeside Twirlers of Winger, MN. Roger has called at state conventions in North Dakota, Minnesota, Wisconsin, Hawaii and Iowa, a South Dakota festival, and international and national conventions.  He is currently booking club dances in seven states.  Bernadette started cueing in 2006 and has cued at many conventions, weekends and festivals.

Roger and Bernadette hosted their first bus trip to Branson "It's Christmas in Branson and We're Goin' Dancing" in December, 2005 and have since hosted several more to Branson, Nashville and Winnipeg.  They hosted a trip to the National Square Dance Convention in Springfield, MA in June, 2015, dancing in 21 states in 10 days. They also hosted a trip to the 2016 Canadian National in Regina, Sask.

In 2008, Roger and Bernadette were nominated by their peers to receive the "Certificate of Appreciation" which was awarded to them at the MN State Convention.  Roger and Bernadette choreographed and published a round dance "Redeemed, Restored, Brand New" in 2009.  Roger released his first square dance singing call "Love Done Gone" in September, 2011.